Adderall is a stimulant medication that contains both amphetamine and dextroamphetamine. It is most often prescribed to both adults and children who have issues with ADHD (attention deficit hyperactivity disorder). While Adderall helps many people with this disorder, the drug is also highly abused, especially on college campuses. Abuse of Adderall can lead to addiction and other dangerous issues.

Adderall contains two kinds of stimulants which, according to the NLM, are "used as part of a treatment program to control symptoms of [ADHD]."

Aderall may also be prescribed to treat narcolepsy (a sleep disorder that causes "sudden attacks of sleep"). 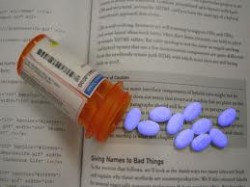 Adderall is abused most often on college campuses, where young people are unaware of the drug's dangers.

The Stamford School of Medicine states that "most people can achieve maximum benefit in 3 to 4 weeks" after using Adderall. There are actually two kinds of the drug, Adderall and Adderall XR, the latter being the extended release version. "Adderall's duration of action is around 6 hours," and Adderall XR lasts about 10 to 12 hours. Adderall XR is "currently the most commonly prescribed medication for the treatment of ADHD in the US."

Because Adderall is a stimulant, it will keep a person focused and awake where normally his or her attention may begin to wander.

It is a very beneficial medication for some individuals who need the extra power to focus. However, there are issues that come with taking Adderall.

Signs and Symptoms of Adderall Use

It is important to know the signs and symptoms of Adderall use. The medication will make someone more alert, awake, and focused which may look beneficial. However, Adderall does have its share of side effects. As stated by the NLM, some of the more common side effects are:

Someone Who is Using Adderall Will Likely:

There are other side effects caused by Adderall that point to serious issues being caused by the drug, such as:

If you or someone you know is taking Adderall and experiences any of the symptoms above, the NLM advises that you should "call your doctor immediately" and get medical help from the individual as soon as possible. Like all drugs, even appropriate Adderall usage has inherent risks and dangerous side effects.

Risks of Adderall Use

Adderall use can cause serious medical problems if not taken or prescribed correctly. Even still, there are some issues that may still occur as a result of the regular dosage. Doctors must ask their patients certain questions to avoid these issues.

According to the FDA, some of the risks of Adderall usage are:

Because of the inherent risks of taking Adderall medically, it is especially dangerous to abuse the drug. However, it is still done widely, especially by college students.

Those who abuse Adderall are those who take the medication without the prescription of a doctor or those who deviate from their prescriptions in order to feel certain effects. Many people abuse Adderall because of its ability to keep users awake and alert. They do so in order to stay up all night or for several days straight. Others still may abuse the drug because it makes them lose weight.

Those who abuse Adderall usually do so in a binge-crash pattern. A person will continue to take Adderall, staying up for days because the medication allows him or her to function without sleep. Then, after a while, the individual will stop taking the medication and crash, sleeping for a long period of time. He or she will then start the cycle over again. It is not healthy, as all of the side effects caused by Adderall can become more pronounced and the person is causing health problems for his or her body while doing so.

Adderall Abuse Can Lead to Other Issues as Well, Including:

Adderall abuse can also lead to addiction, causing even more problems for the individual and his or her loved ones.

Adderall addiction can become very severe and cause many problems in your life.

If you believe you may be addicted to Adderall, ask yourself these questions:

Answering yes to any of these questions could be a sign of addiction.

Adderall addiction can cause further issues for you, such as:

SAMHSA states that "an estimated 6.4 percent of full-time college students age 18 to 22 used Adderall nonmedically in the past year." Most of the people who are abusing Adderall are young, college students. They often do so in order to stay up and study for tests. They do not realize the devastating effects of the drug and continue to abuse it, building up a fast tolerance and addiction.

Some individuals will crush and snort Adderall, but the pills are often ingested as is. Adderall may also be called an upper or just simply the blue pill when someone is making reference to it as a recreational substance.

Other statistics involving Adderall abuse are:

Adderall Addiction and Abuse Treatment
According to the NIDA, "treatment of addiction to prescription stimulants, such as Adderall... is based on behavioral therapies used in treating cocaine and methamphetamine addiction." Patients who have been abusing Adderall will need formal treatment and time in order to fully recover from their addictions. Most treatment programs should take at least 90 days in order to be successful.
Adderall abuse can cause many issues in a person's life, and he or she will need adequate time to fix those problems. Cravings are also a big issue for those who abuse prescription stimulants like Adderall, as they can sometimes last for several months after the person has stopped taking the drug. This is why Adderall detox, as the first step of substance use treatment, is so important.
Adderall Detox
Adderall detox may occur in either an inpatient or outpatient facility. Because the symptoms of withdrawal are not extremely physical (like those of alcohol withdrawal), many people have believed in the past that stimulant withdrawal is not strong. This is absolutely not the case. People have a tendency toward depression and suicide when dealing with stimulant withdrawal. The cravings are also very intense, causing problems for those attempting to stay away from the drug.
In Adderall detox, you might be given medication like anti-depressants to help with your withdrawal symptoms. If you have a strong support system at home and no other issues with mental disorders, outpatient detox may be for you. However, if you are without a supportive group of friends and family, or if you are suffering from another disorder like bipolar disorder, depression, or anxiety disorder, you may want to detox in an inpatient facility.
Types of Adderall Addiction Treatment

The types of therapy you might encounter in treatment are:

Adderall, while beneficial in many cases, can be addictive. Its high potential for abuse makes it a drug of which users should be cautious. Make sure you discuss your use of Adderall with your doctor, and explain any problems or side effects you may be having. Also remember that Adderall abuse can cause issues that are not easily reversed and can leave you with cravings for the drug months after treatment.