Oxycodone is a prescription narcotic pain reliever that is often prescribed to patients for the treatment of moderate to severe pain. Shortly after Oxycodone was released for medical use it quickly became a very common drug of abuse. Despite FDA warnings that Oxycodone had the potential to be habit-forming, doctors began openly prescribing the medication for an array of mild to moderate pain ailments. As a result, Oxycodone would quickly become one of the most widely abused prescription medications in the U.S. 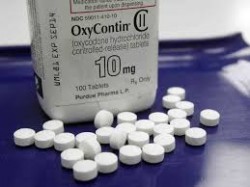 Oxycontin is one medication that contains oxycodone.

According to the DEA, "Oxycodone is a semi-synthetic narcotic analgesic and historically has been a popular drug of abuse among the narcotic abusing population."

The medication is general prescribed in oral tablets that range from 10 to 80 mg. Oxycodone can also come in a quick or immediate release tablet of 5 mg which works to alleviate pain within minutes.

This medication has been marketed under various brand names including Percodan and Roxicet or Roxicodone.

Unfortunately, despite the pain relieving benefits of Oxycodone, this medication has been widely abused by drug users and is known to cause strong physical dependence in those who take it for recreational purposes or, in some cases, as prescribed for legitimate pain.

Oxycodone Side Effects
In patients who are prescribed Oxycodone for the treatment of pain, various side effects are observed. According to a study by posted in PubMed, in patients who took Oxycodone, "significant declines in simple and sustained attention, working memory, and verbal memory were observed at 1 hour postdose compared to baseline," when compared to baseline dosing levels.

According to the National Library of Medicine, common side effects associated with oxycodone use include:

In rare cases, users may experience the following side effects while taking Oxycodone:

Signs and Symptoms of Oxycodone Abuse

According to CESAR, people who abuse Oxycodone typically do so in one of the following three ways:

Each of these methods of abuse are used to reduce or overcome the time release mechanism that is found in drugs such as Oxycodone. The active ingredient is then released into the body almost immediately rather than at a slow, more controlled dose.

Some of the Earliest Symptoms or Signs of Oxycodone Abuse Include:

Do you think that someone you love may be suffering from an addiction to oxycodone? Some of the earliest symptoms of Oxycodone addiction are easily spotted. According to the Center for Substance Abuse Research, "since oxycodone products should only be used based on a doctor's prescription, signs of addiction can be monitored and controlled more effectively than if the user is not under a physician's care." If you are not under a physician's care or if you are using recreationally, you should be on the lookout for the following signs of an addiction:

If you suspect an addiction to oxycodone, seek professional help to ensure you can safely and effective overcome the addiction and take back control of your life.

The National Library of Medicine describes the following symptoms associated with oxycodone overdose:

Abrupt cessation of Oxycodone after prolonged or repeat use will lead to serious side effects. Many of the side effects that are felt during withdrawal from oxycodone are painful and uncomfortable. This can make the process of withdrawal very difficult to cope with and is often the leading factor or cause of relapse.

Symptoms of Oxycodone Withdrawal Include:

According to Harvard Health, "no single approach to detoxification is guaranteed to be best for all addicts." As such, various methods of detox have been developed to help those who become addicted to Oxycodone or other types of opiates such as heroin or prescription opioids. The most common methods of detox include:

DANGER: Abruptly eliminating opiates such as Oxycodone can result in very painful withdrawal symptoms that are likely to lead to relapse. Talk with your treatment professional or healthcare provider about safe alternatives to the "cold-turkey" detoxification method.

Before attempting detox, you should speak with a professional about the safe and more comfortable measures that are available to you. Although the process of withdrawal and stabilization following an addiction to oxycodone can be challenging to cope with, there are medications and therapies available to assist you in feel more comfortable and at ease with your recovery.

Following detox, you will likely require behavioral therapy, counseling and support to continue working toward the complete recovery from opiate addiction. Recovery is a long, challenging journey but it's well worth the effort. Consider the following treatment options when you have safely stabilized through detox: