Health Effects of a Percocet Overdose

Percocet overdose is a dangerous and concerning issue for those who use and abuse the drug. Consider the effects of a Percocet overdose and make sure you understand what necessary steps you should take if you or someone you know experiences an overdose from Percocet.

What are the Effects of a Percocet Overdose? 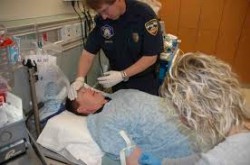 An overdose of Percocet can cause serious long-term damage to a person's health.

Those who experience a Percocet overdose may be in danger of several problematic health effects. According to the PMP, Percocet contains "a combination of oxycodone and acetaminophen" and "is used to treat moderate to severe pain."

Many people abuse the drug as well for the high it causes, putting them more at risk of experiencing a Percocet overdose.

Because of the two types of medication involved, you may experience two sets of effects from a Percocet overdose.

Symptoms of an oxycodone overdose, as stated by the NLM, are:

According to the NLM, acetaminophen overdose, on the other hand, can cause:

Oxycodone overdose symptoms are normally more life-threatening and frightening, but the two together can be very problematic. You should know how to take care of someone if they overdose on Percocet. Make sure to:

Eventual Prognosis of a Percocet Overdose

High doses of Percocet over time can cause liver damage and kidney failure (PMP). Someone who experiences many of these overdoses or who uses Percocet in high doses frequently might experience these issues. Chronic use of Percocet has its own health risks, and abusing the drug only makes it more dangerous. Percocet overdose can be very risky and many people die from respiratory depression.

According to the NLM, "If you receive medical attention before serious problems with your breathing occur, you should have few long-term consequences and will probably be back to normal in a day." However, many people aren't so lucky. "This overdose can be deadly or can result in permanent brain damage." Making sure that you do not experience these issues is dependent on time and how quickly you can be treated for Percocet overdose.

Percocet overdose has many health effects, some of which may even be long-term or permanent. But if you act quickly, you can help someone recover from Percocet overdose to be healthy and relatively consequence free.