Crack cocaine is a powerful substance that is the result of a chemical reaction which occurs when cocaine is mixed with ammonia and other chemicals and heated. The name "crack" comes from the sound that the drug makes when it is smoked. More potent than cocaine and much cheaper, crack abuse is a growing problem on the streets of the United States resulting in overdoses, illicit activity, and other serious complications for users every single day. 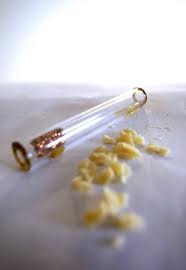 Crack is a form of cocaine which is smoked though a pipe often called a 'crack pipe'.

According to the University of Delaware, crack cocaine is a form of cocaine, "that has been neutralized with acid forming the powdered cocaine hydrochloride, and has then been formed into a smokable substance, through treatment with ammonia or sodium bicarbonate and water, followed by heat to remove the hydrochloride." In layman's terms, crack is a hardened form of cocaine that results from the combining of cocaine and ammonia followed by later heat reduction of hydrochloride.

According to NIDA for Teens, 1% of 8th graders and almost 2% of 12th graders have abused crack cocaine in their lifetime.

While these numbers may not seem significant enough to warrant the worry of parents and caregivers, consider the dangerous effects of crack cocaine abuse which can include:

People who abuse crack cocaine will often act erratically or out of place. It is very common for users to hallucinate and believe that they have bugs crawling on their skin or that there are people out to harm them. The auditory and tactile hallucinations that result when crack cocaine is abused can cause a user to show easily noticeable signs of drug use such as:

Because crack cocaine is smoked, many users will show the following physical signs of abuse:

Signs and Symptoms of Crack Addiction

Crack addiction is a serious problem that many people never find a way to beat. Without treatment, crack addiction can lead to devastating consequences including disease, long-term health complications or even death. You may suffer from an addiction to crack cocaine if you show the following signs:

When an individual abruptly quits using crack cocaine, withdrawal symptoms such as depression, anxiety and irritability set in. Symptoms of withdrawal can actually begin to appear within minutes after a user smokes crack as the high from this drug is very short-lived. Many crack cocaine smokers will repeatedly abuse the drug over and over again in an effort to prevent the "come-down" that occurs. This sudden crash that occurs when the drug is no longer used can include:

To thwart the symptoms of withdrawal, most crack users will seek alternative methods of obtaining the drug in order to keep the high going.

According to NIDA, "because drug abuse and addiction have so many dimensions and disrupt so many aspects of an individual's life, treatment is not simple." Effective methods of treatment recognize the premise that an addict will require more than just help overcoming the addiction. Changes will have to be made to reduce withdrawal, to prevent cravings, to cope with cravings, to restore stability in family and life, and to ultimately help the individual adjust back to society without the use of drugs.

In a study conducted by Harvard-M.I.T. Division of Health Sciences and Technology, young men were shown a ten minute video that alternated segments of 2.5 minutes of butterflies followed by a similar segment of crack smoking, all while the men wore a brain scan monitor to show function of the brain and it's response to the stimuli of the video. When the crack smoking segments of the video were shown to cocaine users, there was increased activity in two regions of the brain that was not seen in the non-users. This is just one study that proves how easily cocaine users can be tempted to use and it's a vital study to be used in the future of crack addiction treatment protocol.

Various methods of treatment exist for those who are addicted to crack cocaine including:

Although there are no known medications that can be used to effectively rid the user of his or her addiction to crack, there are some advances in laboratory testing taking place in pilot studies throughout the country. According to Columbia University, the following studies are taking place in an effort to develop or determine whether a medication could be used to help those who are addicted to crack cocaine:

Any of these methods of treatment can be provided in either a residential or an outpatient setting depending on the individual needs of the recovering addict.