Many people know and understand the possibility of individuals abusing illicit drugs (like marijuana, heroin, and cocaine) and prescription drugs (like opioid pain relievers, sleeping pills, and stimulants). But there is also a danger, especially for teenagers and children, of the abuse of inhalants which can be found in any home.

The NIDA states, "The term inhalants is reserved for the wide variety of substances - including solvents, aerosols, gases, and nitrates - that are rarely, if ever, taken via any other route of administration." Some of these possible substances of abuse can include:

According to the NLM, "Household products such as glues, hair sprays, paints, and lighter fluid can be drugs for kids in search of a quick high." All of these are considered to be inhalants because abusers "inhale vapors from these." Not only is it unsafe, but it can be very addictive and can especially cause young individuals to start abusing other types of drugs, working as a gateway drug.

How Prevalent is Inhalant Abuse?
Inhalant abuse is prevalent and especially so among the young. According to the NIDA, "They are especially (but not exclusively) abused by young children and adolescents, and are the only class of substance abused more by younger than by older teens."For example, 13% of eighth graders admitted to using inhalants in 2011, while only 8% of twelfth graders responded the same (NIDA 1).
"National surveys indicate that nearly 21.7 million Americans aged 12 and older have used inhalants at least once in their lives" (NIDA). While many children and young adults tend to stop as they get older, there is still the possibility of dangerous side effects occurring as a result of their inhalant abuse and even of the eventual abuse of illicit substances later on. Inhalant abuse is very prevalent because:
How Are Inhalants Abused? 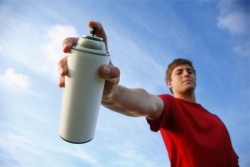 Inhalants may be abused directly from their receptacle, by spraying them in bags or on rags, and in other ways.

Inhalants are either sniffed from the container or huffed from a rag which is first soaked in the substance and then held up to the face. Some inhalants, like aerosols, are inhaled from a spray bottle and the rag is used as a filter.

Some abusers put the rag or container into a bag so that the vapors will become more concentrated. Abusers inhale the substances through both the mouth and the nose and often do so "repeatedly over several hours" because the high wears off quickly (NIDA 1).

As stated by the NIDA Teen, "The chemicals found in these products can change the way the brain works and cause other problems in the body," much in the same way that other drugs of abuse do. According to CESAR, some of the health effects caused by abusing inhalants are:

Any of these issues could occur as a result of regular inhalant abuse. Brain damage can also result from abusing these substances and can sometimes be permanent, especially if the person abuses inhalants regularly.

Another condition is called SSDS, or sudden sniffing death syndrome. It is "an unexpected disturbance in the heart's rhythm and can cause heart failure." According to the NIDA, "sniffing highly concentrated amounts of the chemicals in solvents or aerosol sprays can directly cause heart failure within minutes." This can be similar to the overdose syndrome caused by many commonly abused drugs, as drug abusers do not often realize how much they are taking and how strongly the drugs will affect their systems. Someone who abuses inhalants in high concentrations could also die as a result of suffocation.

How Do I Know If Someone is Abusing Inhalants?

Being concerned that someone you love might be abusing inhalants is scary. It is important to know the signs and symptoms of inhalant abuse so that you can catch it as early as possible. According to CESAR, some of these signs are:

Paraphernalia signs of inhalant abuse will be obvious if found. Other signs may be general edginess and mood swings. Someone who is abusing inhalants will try to hide their abuse, but the longer it goes on, the more obvious it will become.

According to CESAR, "sustained inhalant use can cause tolerance" where the individual will need to do more and more to feel the effects. People who abuse these substances also experience dependence, and soon the only way they feel normal is when they are abusing inhalants. Withdrawal symptoms actually do occur as a result of inhalant abuse.

This syndrome can be very serious, and a person experiencing inhalant withdrawal should not be left alone.

According to the NIDA, "Although it is not very common, addiction to inhalants can occur with repeated abuse" (NIDA 1). Because inhalants change the way the brain works, just like any other habit-forming drug, addiction is possible. In other addiction cases involving recreationally-abused drugs like marijuana, cocaine, etc., the signs of addiction are:

Because inhalants can cause any of these issues, they do have the potential for addiction. While many individuals are able to avoid addiction to inhalants, it is a possibility, especially for those who abuse them constantly.

What Can I Do to Help Someone Who is Abusing/Addicted to Inhalants?

As previously stated, many inhalant abusers are children and teens. This means that parents need to be aware of the prevalence and existence of inhalant abuse and try to prevent it if possible. According to the CPSC, "One of the most important steps you can take is to talk with your children or other youngsters about not experimenting even a first time with inhalants."

Consequentially, if you think someone you love is already abusing inhalants, try these steps:

If you do suspect that someone you know is abusing inhalants, substance abuse treatment is still a good resource for this issue. Formal treatment helps many individuals with a combination of medication and behavioral therapy which teaches them new ways to cope with their abuse.

According to the DOJ, "There are more than 1,000 products that are very dangerous when inhaled." While it can be difficult to tell at first if someone is abusing inhalants, there are many signs and symptoms which can point to the possibility. And because inhalants can be just as dangerous as illicit drugs when it comes to the possibility of overdose and addiction, preventative measures are important as well as is knowing when to seek help.