Oxycontin vs. Oxycodone - What's the Difference?

While sometimes used interchangeably, oxycodone and OxyContin differ in the types of effects they produce. Both drugs exist as Schedule II opiate narcotics, meaning they carry a high potential for abuse and addiction. Opiate drugs in generate produce pain-relieving effects, which accounts for their widespread use.

Oxycodone can be prescribed as a single ingredient as well as with a second non-opiate analgesic, such as ibuprofen, acetaminophen or aspirin. Drugs such as Percodan, Percocet and Tylox contain oxycodone as the main ingredient coupled with one other non-opiate analgesic. OxyContin contains a large amount of oxycodone, with dosage levels ranging from 10 to 80-milligram tablets.

In effect, the difference between oxycodone and OxyContin has more to do with how they're formulated and the effects each drug produces. 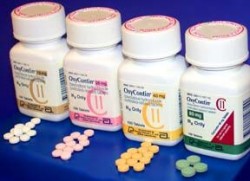 OxyContin is a form of oxycodone.

Opiates work by attaching to certain cell receptor sites located in the brain, along the spinal cord and along the gastrointestinal tract. These cell sites secrete the body's own pain-relieving chemicals, also known as neurotransmitters, on an "as-needed" basis.

When ingested, both OxyContin and oxycodone bind to these cell sites and stimulate the release of neurotransmitter chemicals. This chemical reaction changes the way a person experiences pain and can also produce feelings of euphoria and calm in the process.

Short-Acting vs. Long-Acting Formulations
Oxycodone produces short acting effects that have an immediate onset. This drug formulation starts working within 15 to 30 minutes with pain-relieving effects lasting for up to four hours.
Short-acting opiates work best for treating acute pain symptoms that are expected to last for only a few days at most. Dosage scheduling would require a person to take a pill every four hours or so.
OxyContin works as an extended-release form of oxycodone. This drug has a built-in time-release mechanism that delivers the effects of the drug over a 12 hour time period. OxyContin is usually prescribed to treat conditions involving moderate, severe and chronic pain symptoms, such as arthritis and cancer.
Addiction Potential

While both types of drugs can be abused by crushing up the tablet form and snorting, smoking or injecting the drug, OxyContin poses a much higher risk for addiction. When crushed into powder form and ingested, there's no time-release mechanism at work so users experience the full effects of the drug all at once. This makes for an extremely intense "high" compared to oxycodone in powder form.

In general, the more intense the "high" the greater the effect on brain chemical functions, which greatly increases OxyContin's addiction potential compared to regular oxycodone. For these reasons, drug manufacturers have come up with a new OxyContin formulation that prevents users from abusing it in powder form. While this new form of OxyContin does help curtail abusive practices, users can still ingest large amounts of the drug in pill form.

While these two drugs may differ in terms of short-acting versus long-acting effects, their addiction potential, for the most part, remains the same.