People suffering from moderate to severe pain symptoms may well be prescribed Dilaudid as a treatment. Dilaudid, also known by its generic name hydromorphone, belongs to the Schedule II class of opioid analgesics, which carry the highest potential for abuse and addiction, according to the National Institutes of Health.

Like most all opioid analgesics, Dilaudid acts on chemical processes within the brain. From there, the addiction process develops in increments as actual brain cell structures start to undergo changes as a result of Dilaudid's effects.

While taking Dilaudid as prescribed greatly reduces the likelihood of abuse and addiction, the risk is still there all the same. Abusing Dilaudid on an ongoing basis all but guarantees a person will succumb to the drug's addictive potential as physical and psychological dependencies gradually take hold. 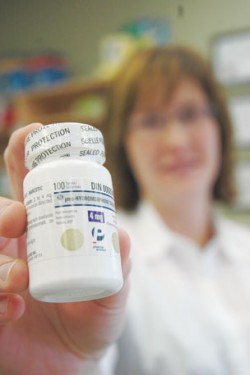 Dilaudid has a high potential for abuse and addiction.

Dilaudid works as a psychoactive drug that's able to cross the body's blood-brain barrier and alter essential brain chemical functions. Most every drug capable of accessing the brain's chemical processes carries some potential for abuse and addiction.

Once inside the brain, Dilaudid's effects target the brain cell receptor sites that secrete neurotransmitter chemicals, a few of which are serotonin, dopamine and norepinephrine.

On contact, Dilaudid causes these cell sites to secrete larger than normal amounts of chemicals into the brain, while at the same time preventing the brain's reuptake or recycling processes from occurring.

This surge of neurotransmitter chemicals accounts for the drug's pain relieving effects and also produces certain after effects, such as calm, euphoria and total relaxation. These aftereffects play a pivotal role in the drug's addictive potential.

While Dilaudid can be abused as is, in pill form, it's not uncommon for users to crush pills up into powder form in order to snort and/or shoot up the drug. The latter two methods deliver the full effects of Dilaudid all at once, which in turn speeds up the addiction rate considerably.

While many people may take to abusing Dilaudid for the pleasant aftereffects it brings, Dilaudid abuse becomes second-nature once a physical dependence sets in. Physical dependence develops out of the brain's growing tolerance for the drug's effects.

Psychological dependence is the defining characteristic of addiction. At this point, a person has come to rely on the drug's effects as a means for coping with everyday life stressors and pressures.

Psychological dependency takes root within the mesolimbic reward system, which regulates learning processes in the brain. The repeated surges in dopamine neurotransmitter chemicals gradually "reconfigure" how this system works.

By the time psychological dependency sets in, Dilaudid has become the primary motivation in a person's life. In effect, his or her beliefs, motivations and behaviors all center on getting and using the drug. Ultimately, a person's entire lifestyle works to support an ongoing Dilaudid addiction habit.

Signs and Symptoms of Dilaudid Addiction

Signs and symptoms of Dilaudid addiction start to develop as brain and body processes become more dependent on the drug's effects. The more deteriorated brain cell structures are the greater the intensity of symptoms experienced.

Areas of the body regulated by the central nervous system include:

Dilaudid's effects can vary depending on a person's overall physical and psychological health, so someone with pre-existing conditions in any one of these areas may experience more severe symptoms than someone in good health.

With long-term Dilaudid abuse, users develop what's known as the opioid withdrawal syndrome. This condition stems from the ongoing chemical imbalances present throughout the brain and body.

These imbalances result from Dilaudid's ability to produce large amounts of neurotransmitter chemicals every time a person uses the drug. As normal brain function relies on a delicate chemical equilibrium at all times, a person can abuse Dilaudid but for so long before symptoms of an opioid withdrawal syndrome start to take root.

Symptoms of opioid withdrawal syndrome represent the first signs of a growing addiction. These symptoms commonly take the form of:

With continued use, symptoms of Dilaudid addiction become increasingly worse as the chemical processes that regulate bodily functions continue to deteriorate, according to the U. S. Food and Drug Administration.

After a certain point, no amount of Dilaudid will be able to relieve withdrawal discomfort. Users will also be unable to experience the desired "high" effects of the drug once brain cell deterioration reaches a certain point.

Much like the physical decline a person experiences from ongoing drug use, Dilaudid's effects on the brain's mesolimbic reward system bring about noticeable changes in his or daily routine and behaviors.

Someone who's addicted to Dilaudid may not actually notice these changes take effect, but those closest to the addict not only see the transformation, but are likely affected by it as well. This is especially the case when a spouse, child or parent struggles with an addiction problem.

Signs of Dilaudid addiction can appear in most every area of a person's life, some of which include:

Someone struggling with Dilaudid addiction will continue to see his or her quality of life deteriorate in the absence of needed treatment help.

As addictions tend to develop in stages, Dilaudid addiction treatment follows a step-by-step process that addresses the effects of addiction in stages. Various factors contribute to how severe any one person's addiction may be. These factors may take the form of:

In effect, the severity of a person's addiction will determine which type of treatment will bring about the best results. The overall purpose of Dilaudid addiction treatment works to help addicts overcome the physical and psychological damage brought on by prolonged drug use.

Detox, Residential and Outpatient Treatment Options
The first stage of Dilaudid addiction treatment entails a detox process that's designed to break the body's physical dependency on the drug. People who started out taking Dilaudid as a pain treatment may go through a taper process while starting on another, non-opioid-based pain treatment medication. For people who use Dilaudid for recreational purposes, detox will likely entail stopping drug use altogether.
While detox does help addicts get past the physical dependency, it's the psychological effects of the drug that make a person susceptible to resuming old drug-using behaviors. For this reason, someone in treatment should go directly into a residential or outpatient program to address the psychological aspects of addiction.
Residential programs differ from outpatient treatment in that a person actually lives at the treatment facility for the duration of the program. For someone who's abused Dilaudid for months or years on end, residential programs offer the level of structure and monitoring needed to ensure ongoing abstinence.
Outpatient programs offer more flexibility and freedom in terms of being able to schedule treatment times while living in one's own home. These programs work best for people who enter treatment at the early stages of addiction as well as for those who have work and family obligations to uphold.
Medication-Assisted Therapies

The damaging effects of long-term Dilaudid abuse on the brain can persist for months or even years after a person stops using the drug. In effect, brain cells have undergone significant damage leaving them unable to regulate bodily functions as normal.

With medication therapy, recovering addicts can better function at work and at home as these drugs greatly reduce the ongoing withdrawal syndrome people often experience in recovery.