Early drug prevention programs, delivered during the elementary school years, have been found to positively influence safe behaviors later in life, reducing the risk of contracting HIV/AIDS. According to a recent study posted in Prevention Science Journal, even the highest-risk young people who take part in drug prevention programs during their elementary school years are likely to reap the rewards of reduced sexual behaviors that are often associated with the transmission of HIV. 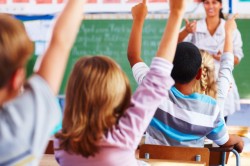 According to the National Institute of Health, there are 40K new cases of HIV in the United States each year, and almost a quarter of those cases are young adults under the age of 25. Many factors contribute to the risk of young people to contract HIV/AIDS including drug use behaviors such as:

As such, children who actively participate in youth drug prevention programs and who are educated on the dangers of drug use can later reap the benefits of reduced risk simply because they are less likely to use drugs than those who are undereducated or who do not realize the grave dangers involved with drug use.

According to researchers, risky behaviors, especially those involved with drug use, can lead to long-term, and potentially life-threatening consequences. Dr. Kristine Andrews, author of "Preventing Multiple Risky Behaviors among Adolescents: Seven Strategies," suggests that the following strategies can help to prevent unwanted, risky behavior amongst our youth:

Taking these initiatives, can literally save the lives of young people long after the individual has grown up.

By reducing risky behaviors now, at risk children have a better chance of living healthy and not falling into the perils of drug use and the potential dangers associated with increased activity that could lead to the contraction of a disease. While research has clearly outlined the risk factors associated with HIV, and we know that individuals who take part in unprotected sex, use injection drugs or are men who have sex with other men are at a greater risk of contracting the disease, why not further educate our youth against the use of drugs in an effort to battle two growing problems with a single outreach and prevention program?