Drug Use on the Rise Despite Billions Spent to Combat It

The Office of National Drug Control Policy, charged with the task of oversight and administration of federal drug policy, has budgeted billions of U.S. dollars each year toward the reduction of illicit drug use, but despite the billions spent, drug use continues to be on the rise. 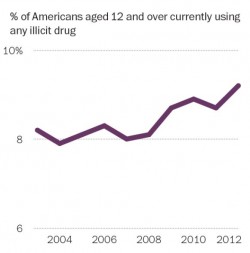 This graph shows the % of Americans aged 12 and over who are currently using illicit drugs.

Since 2003, the ONDCP has budgeted more than $10 billion annually toward the prevention, treatment and overall reduction of drug use in the United States.

This budget has grown exponentially in the past ten years but despite increased spending on the practices of prevention, treatment, law enforcement to reduce supply, anti-smuggling operations to further reduce supply and international operations to crack down on incoming supplies from other countries, drug use in the U.S. has continued to spiral out of control.

Unfortunately, despite all of the increases in spending, the trend for drug abuse amongst Americans over the age of 12 is equally rising. An estimated 9% of the public population admits to current drug use, a number up from a few years ago.

Why Isn't the Spending Effective?
Opponents argue that the ONDCP spending on prevention and treatment is not substantial enough when compared to spending on law enforcement efforts. Many believe that greater spending and focus on prevention and treatment efforts would counteract the rise in drug use. As greater emphasis is placed on public health overall, federal agencies such as the ONDCP are also expected to take a stance toward helping the public to improve their well-being
According to some, drug control spending places too much emphasis on arrest policies, the punishment of those who have been caught with drugs rather than focusing on how to prevent these problems from occurring in the first place. Through treatment, through prevention and community outreach, fewer arrests may be made and the need for punishment would ultimately become less important as opposed to the need for more education as to the risks and dangers associated with drug use.
What's Next?

Unfortunately, there's no way to know exactly how drug control policy will prevent drug use or reduce the use of drugs by Americans. While projected spending budgets for the upcoming year are expected to be increased by approximately $150 million, will we see a subsequent (and unwelcomed) increase in drug use throughout America? Or, will the nomination of Michael Botticelli to lead the Office of National Drug Control Policy prove to be a positive measure in the fight against drug abuse throughout the United States - only time will tell.